Scrapping is such a handy hobby!

This friday my daughters kindergarden had the annual carnival,
where all the kids dress up as something.
Normally the carnival is in February, but it was postponed
this year, and I did not think too look for a costume earlyer.
So on thursday when I went looking, there was nothing to find.
I was preparing to buy a little pirate-stuff, and just put together
a striped sweather and rip up an old pair of pants and tie a scarf
on her head to make a sweet little pirat,
when a nice lady at a store opened the box of costumes she
was getting ready to ship back.
I found this adorable angel-costume,
it was a dress and a set of wings. The dress was way to small,
but it was very elastic, so here is what I did:
I cut the skirt right off, so it became this adorable tutu instead. 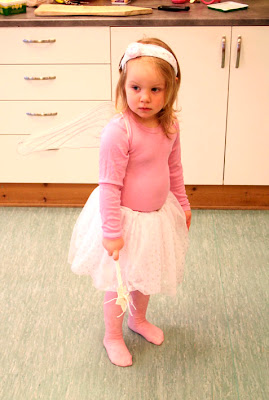 I used my scrap stuff to create a magic wand out of a wooden star
and a set of chopsticks, pearl ribbon, pink pearls and a piece of tuille,
a rose and a silver bell to get a magic sound. 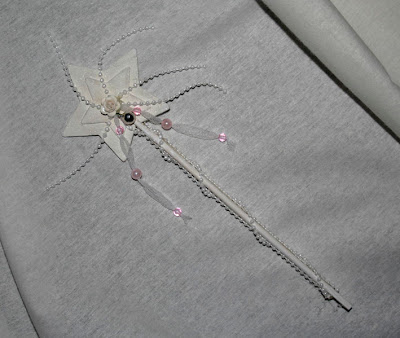 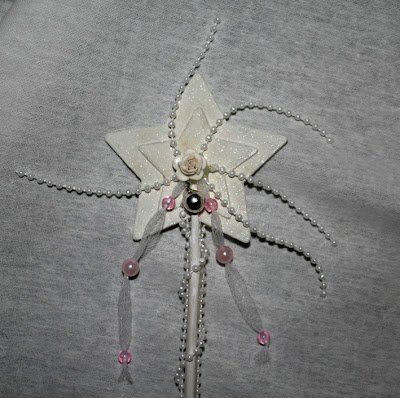 The star was painted white and covered in white glitter,
then I used hairspray to make it stay on. 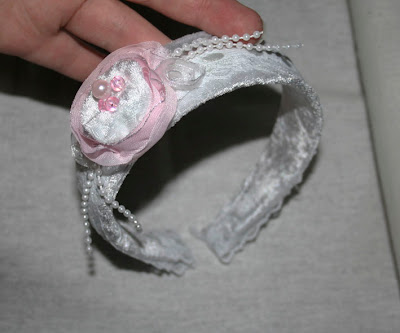 The fabric I cut of the dress was used to cover this "not so pretty"
headband that Sofie got for her birthday. I decoratet with lace,  pearl ribbon and some
fabrik flowers cut from a flower-ribbon, and a round flower I made myself,
with some pink pearls for detail, to match the wand. 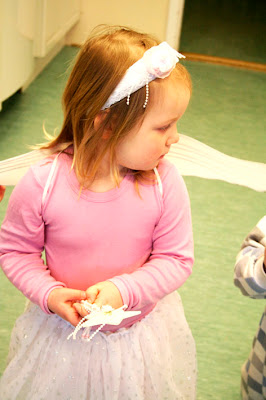 Combined with a pink onesie and panty hose,
and some sparkle in her cheeks, she was ready to go.
I think she looks soooo adorable,
just have to brag a little. :) <3
Lagt inn av Anne kl. 22:14

Anne she looks so adorable and so cute! Such beautiful photos to keep your special memories! Chanelle xx

Oh what a beautiful little Fairy you have!
Sofie looks so sweet as a fairy, and what a clever Mummy to make the alterations and wand and pretty hairband :)

Oh my sweetie your daughter makes the most beautiful angel!!! I love her costume and what a terrific job you did with the headband and wand. Your such a great mommy!!!! Thank you for sharing the most cherished part of your life. I just love pictures.
Hugs Bonnie

Aww your daughter is Adorable Anne!!! doesn't she look sweet! I love the wand that you've made - it's every little girl's dream - especially with the little bell !! I love her headband too - she is like a real fairy princess!!
Hope you are well
Big Hugs!
Sue xx

She is a cutie Pie, love the tutu!!