This project I think I started to plan about a year ago,
and I have had the bazzil base for the pennants lying around since then.
This week I finally made the letters, cut out the patterned paper and
chose and inked up some images.

I wanted to do it a little more shabby,
but I just love the papers and I settled for a cleaner look.
No embellishments! *gasp!*

But I think it looks quite cute in Sofie's room. :)
The cards on the shelf are the birthday cards I made for her second and third birthday. 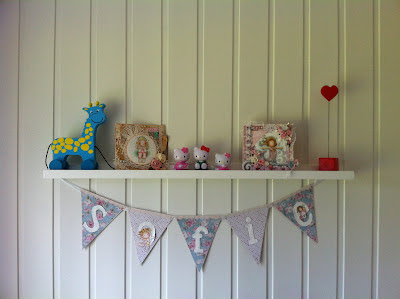 The papers are from Maja, and I love them so much!
I used my Martha Stewart lace punch, forgetting that it was actually broken.
One of the little holes is missing, the little pin broke of the last time I used it. 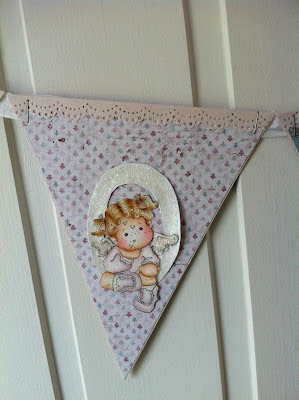 The letters I drew up and cut out of Bazzil.
Then I painted them a few times with Gesso,
then covered them with a thick layer of Crackle Accents,
and then Star Dust Stickles. 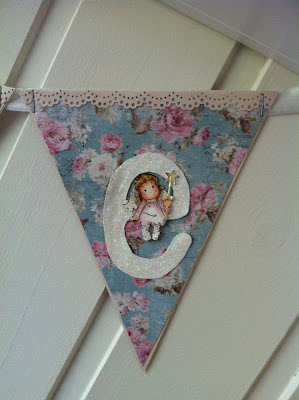 The pennants are glued on a strip of seem binding ribbon,
and I stapled each pennant for extra support.

Challenges:
Tildas Town - Anything Goes
In the pink - Things with Wings (not sure if its pink enough, but I'm trying. )
Magnolia-licius - Color Challenge
Lagt inn av Anne kl. 10:02

Very beautiful and elegant work
Is wonderfully made

What a beautifully decorated banner - I clicked on the photos to enlarge them and they look so pretty. Maybe a little bit more pink next time Anne, but I think there is just enough to qualify for the challenge this time at In The Pink!
Thank you for joining us - hope to see you next time - Sylvia xx

What a beautiful pennant Anne!!
I'm sure Sofie loves it as I do!!
Thanks for joining us at Tilda's Town this week!!
Hugs, Tina

OMG Anne this is too adorable...love the banner and the sweet images!! Love it my friend!!

Gorgeous project! I love your papers and design! Thanks for joining us at Tilda's Town! Hugs Delphine xx

Stunning, I've got the same plans in my head for my daughter, but too much other stuff to be done
Thanks for joining us for this challenge at
Tilda's Town Challenges
Hugs, Becky x

I've got candy on my blog if you're interested, http://attic-crafter.blogspot.co.uk/